When I first started writing, I started off writing SF and Fantasy. This was partly due to being in my teens–I was on a total SF/Fantasy kick for reading. And it was what I was drawn to. Years later, I switched over to Regency romance–quite a jump most folks think, but not really. You see–it’s all about the world building. And the emotions.

In between the SF/Fantasy and Regency (and there’s a bigger cross-over in that audience than you’d ever know, given the Regency dancing that’s shown up at most SF conventions), I did some YA Horror stories–stuff that goes bump in the dark. Again, it’s all about the world building–and the emotions. 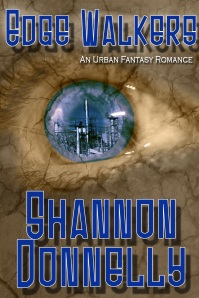 Now I’m back to SF/Fantasy for an edgy Urban Fantasy–Edge Walkers. This is one of those things where you shake your head as a writer and wonder what are you doing…but then you write the story anyway. When I wrote the story, I needed a change up from the Regency writing. I also wanted to get back to my roots with SF/Fantasy, and wanted to do a zombie book that worked for me (most of them don’t, however, I adore the movie, Zombieland–but Edge Walkers is nothing like that). I also wanted to do a book where the sex needed to be in the story–I was at a phase where I’d been reading too man books with sexy scenes that just seemed to have the scenes stuffed in there to add the sex. That didn’t work for me.

The trouble with all of this is that Edge Walkers isn’t part of the Urban Fantasy series I’m doing–the Demons & Warders series with Burn Baby Burn and Riding in on a Burning Tire, which is due out soon (and the third book is going to be Angels Don’t Burn). It’s not a Regency, and is nothing like those books in tone, so it’s going to have to find it’s own readership. I love the book, but then you always love your babies–even the challenged ones.

But now it’s out I do plan to get back to the Regencies–I have plans there. And I’m more than ready to step back into that other, lighter world.

That’s the best part of taking a diversion with the writing–it leaves you eager to go back to the other stuff.

Will Edge Walkers do well on it’s own? Maybe–or maybe it’ll be a grand experiment that leaves everyone (even me) shaking their heads. But a writer’s got to go what a writer’s got to do. It would just be nice, from the marketing side of things, if all my ideas fit better into a single box.