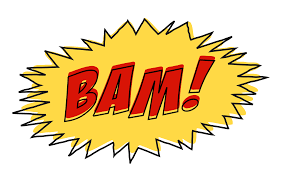 I judge a fair number of writing contests–my way of giving back since I learned a lot both from entering and judging. One thing almost always pops out–experienced writers know how to punch dialogue. And nothing marks a writer as a “beginner” as much as flat dialogue.

This November, I’m teaching my dialogue workshop for YRW, but there are a few tips that can help punch dialogue to take it from flat to fab.

First off, get the technical stuff clean and perfect enought to show you’re a professional who knows the craft. Commas in the wrong place, periods used when you need a comma, or vice versa, and quote marks incorrectly used will stop a reader. This distraction throws the reader out of your story–so just get a copy of Strunk & White’s Elements of Style, keep it by your computer and master you techniques.

Next, are you propping up the dialogue with tags? Does your heroine sigh words, does the hero say things angrily? If you’re putting in descriptive phrase  like that odds are the dialogue itself is weak. Instead of going for a crutch, tear out every description for the dialogue and look at the words coming out of the characters’ mouths.

Pretend you are writing a script for our favorite actors–and you want those actors to come to you and praise you for giving them wonderful words to say. Make the dialogue itself the star, not the descriptors.

When you do describe how someone is talking, make it vivid and detailed. Don’t settle for one word. If  the character trails off with a weak, squeaky gasp, be specific about what that really sounds like. If a character has a charming Scottish lilt and burr, describe that early on but don’t try to recreated it unless you have a really good ear for how to work this in.

Do an edit JUST on each major character’s voice. Does this person have a unique voice? Pet phrases? A regional shading to the words? Words that reveal the character’s education, experience and intelligence? Now look at the other major characters–are they all sounding alike?  Can the reader tell who is talking just by the words spoken? If not, it’s time to revise and give each character his or her own voice.

Read  your work aloud. There is no habit that will help you more. Do you stumble? If so, the reader will as well. Are there awkward sentences? Unclear thoughts? Yes, in ordinary life people cross-talk and talk nonsense, but this is fiction–the dialogue has to be better than real life.

Are the words right for the character and the era? If you’re writing a historical set in the 1940’s different words will be in use than a historical set in 1840, or 1640. Now, too much accuracy can throw a modern reader, but too much inaccuracy will also jar the reader from the story. Think, too, about not just how different a world would be in the past, but also the differences between classes, genders, and countries. These are subtle differences that can make your characters come to life–or leave them flat cardboard stereotypes.

Be picky–about the words chosen, about the tone in the words, about the voices your charcters have. Don’t settle for okay dialouge–give every character great words to say. Use dialogue to let your characters express emotion, negotiate for what they want, to lie and to try and get out of tight spots. Don’t just stuff plot explotion into a character’s mouth and call it good enough. It’s not.

Sometimes less is more–learn to edit and revise your work. Do multiple drafts. Do an edit just on dialouge. Do an edit just on action tags. Use actions to reaveal the truth and dialogue to hide the truth. Remember–we don’t just talk to tell someone something, we try to convince, to hide, persuade, passively get our own way, punish, lie, cover up, hide, and a million other things. Words aren’t just a writer’s tool, we all use them. So know what your charcters want in each scene and have them trying to get it–all within character. But what a character doesn’t say is often more important than anything else.

Let your characers be funny, witty–let them say the things you always wanted to say, or thought up an hour later. Again, fictional dialouge needs to be better than how we talk in reality. Punching means punching up to make words stronger and dialouge sharper.

There are some other tricks, but these  will get you going to make your dialouge stand out–and often it’s the dialogue that really sells a story.