Just finished the edits to get A Proper Mistress online, and it’s a delight to have a visit back with these characters. It’s a lighter romance, more what’s been called a Regency romp, though I don’t go for taking things too absurd. And that got me thinking about how touchy this sort of thing is to write, and my own guidelines for writing humor. My style is a blend of humor, a little drama, action, and I like to mix all of that up. I’ve tried to see how dark I can go, and I never can go all that dark–it almost always twists into black humor at some point. But, then, I like a little spice in almost everything. And, yes, you’re going to get a lot of cooking metaphors here–Molly Sweet, the heroine of A Proper Mistress is a delight and a cook and she always puts me into that frame of mind — which leads us to where we need to start, which is with characters. 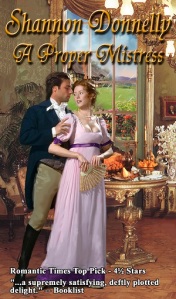 Humor, in particular, needs characters who can carry the absurd. That’s harder than it sounds. I also think humor needs dialogue–great, snappy, fast dialogue. All the stuff that folks usually think needs to come out of their mouths and onto the page, and that’s going to keep the pace of any story moving and keep it fun. The other critical element is that I think the characters need to take their own situations seriously–its their lives. We may laugh, but if they do, it’s a bit like someone laughing at their own joke–kind of puts the pressure on that you should laugh, too, and that takes away the fun.

The other critical element is to know your character’s intelligence. I think writers often forget about this one, but it’s vital with humor. You need to know if a character is quick-witted, or a bit slow. You need to know how every character thinks. And you need to give them good reasons for why they are that way–there needs to be a reason why someone may be smart, but uneducated, or why someone else is smart in one fashion, but very stupid in other ways. This affects the story in major ways, and can be a great source of humor–with this, you don’t end up relying on ‘things’ being funny. Humor always works best when it comes from the characters, and the absurdity of life.

I also think you need to either build the absurd, or you need to start with it. Building the absurd is what the screwball comedies of the ’30’s do so well–they just keep stretching the absurd until its insanely silly. For a book, I like to go the other route and start with a situation that’s already heading off into crazy land.

For A Proper Mistress, I also wanted to start with twisting a cliché. This works great in any scene or story–take something that’s done to death and put a fresh spin on it.  The spin was that I’ve read way too many books in which the hero or heroine needs to get married in order to get an inheritance. This is such a worn old shoe that it squeaks. However, with the twist comes the need for motivation.

Good characters are method actors, always asking, “What’s my motivation?” Characters need reasons to do absurd things–these may be absurd reasons with faulty logic, but they should seem sensible to the characters. Which leads to the core question: what pushes a guy into trying to get disinherited?  Of course, the answer is what pushes us into most stupid things, and for me that’s a dysfunctional family.

The good part of being a writer is that all that junk in your own attic of live is useful. Creating a dysfunctional family isn’t hard for me since I had one, all my friends have one, and I actually have a hard time with normal. Everyone in A Proper Mistress is coping as well as they can, but they all have Issues–with that capital in there. The other thing about humor is that a little drama can help you ground it–it’s like having a string to a balloon.  Or to really mix the metaphors, a nice dense chocolate cake to go under the fluffy, sweet whip cream. Backstory for characters–the faulty motivations–is a great place for this grounding. And so is the character’s secret.

For me, characters start to come alive when they start keeping secrets–from others and from themselves. In A Proper Mistress, the hero both worships his older brother, but he’s also secretly a little resentful, and he doesn’t even realize it. The heroine has a secret wish to have a family (she’s an orphan). Theo’s dad has the biggest secret of all, one that’s impacted everyone’s lives, and all this is starting to sound a bit heavy. Which is where the last ingredient comes into play.

Balance in a story is as critical as the balance of spices and elements in a meal. And you want to push this balance off-center to get the emotion and effect you want. Go too far, however, and you end up with a hot mess. So with humor, you want to keep it light, fast-moving–the balance has to be more on what’s happening in the story, with only the lightest touches of heavy backstory. Molly was a godsend in A Proper Mistress. She could have ended a very tragic person–she’s had a tough life. But she’s resilient. She has no time to dwell, and is all about dealing with what’s happening now. She kept the story moving with her personality as much as anything else.

That brings us full circle and back to characters. Writing light, characters are everything. Their actions, their dialogue, their motivations, their flaws–which need to come out big time–provide all the elements for funny. Humor, for me, is about poking gently at all the flaws we carry with us–and pushing them a little bigger so those flaws stand out in the bright light of the absurd.  It’s about letting your characters go so they can surprise you and come up with their own twisted thinking. Give everyone a point of view and a plan, so that nothing ever goes right, or goes quite the way the characters think it will.

Above all else, humor needs two more things.  The first is a light hand–you need to edit, but you can also edit the funny right off the page. This means you have to treat the writing with a light touch–keep the prose clean and the plot even cleaner. If you get too fancy with technical stuff, it’s going to weigh the work down and dull the humor. The second is the courage to let your own quirks come out. Take your own flaws and put them on the page and into your characters. If you can laugh at yourself, it’ll be easier for readers to laugh at your characters and their absurd lives.