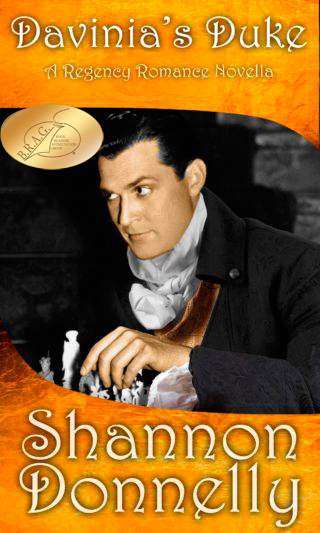 Davinia’s Duke–my most recent Regency romance novella–has been awarded the indieBRAG Gold Medallion. I’m delighted by this–it is my second independently published book to earn the medallion, which is awarded based on ten categories. This award is a boost for authors who publish independently–promotion is always hard to come by.

The other thing that is wonderful is the award encourages independent writers to make sure they have good editing, and good copy editing. Again, both those things can be difficult to come by. A good editor will improve the work without messing up the writer’s voice. A really good editor can also point out glaring problems that really do need to be fixed–pacing problems, plot holes, or just stuff that doesn’t make sense. Let’s face it, we all get lost in the woods at some point and need someone else to point out a better path.

Copy editors are then just as important–not only to catch the typos (the ones that hide from your eyes because your brain insists on making the correction in your head and not on the page), but to also finish untangling things that crept into the story.

I had very good editing from Leigh Kaye, and a great copy edit from Red Adept Editing, and a cover that fit the story from What the Hay Designs, which all goes to show that a book needs a team behind it, and not just a writer.

I also think that it is the writer’s job to first produce as clean a story as possible in the very beginning–and I used some beta readers just to make sure the story worked. My philosophy is that as the writer, I should know where the flaws exist to begin. If the early readers don’t catch them, then the magic act has worked. If they do catch the issues, then it’s time for revisions. And I like to get all those revisions done early. Because, guest what–yes, every new word on the page introduces problems for more plot holes and pacing issues and other mistakes. First draft is always first draft and needs another draft or two for some polish. However, the caution there is that it is possible to polish out the emotion on the page–so that’s where experience helps and some caution.

So…here’s to a nice, shiny gold medallion on the book, and to independent authors who publish their works! May we all strive for great stories with great characters.