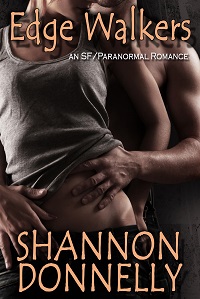 Edge Walkers is one of those books with a soundtrack — I spent hours listening to Sarah Mclachlan, Nine Inch Nails, Adam Lambert, Evanescence, Coldplay and K.D. Lang (yeah, quite the mix). My trick with writing and songs is to play the song so often that it becomes white-noise. Somehow this shuts off the editor so you can get to a different place with the story.

Now I need to go build a play list for a historical romance–that’s a whole lot harder to find.

There was no insta love in this story. Instead it was slow and was built up over the course of the story. It was nice to see them get to understand each other better and come to trust one another as they slowly fell in love. — The Romance Reviews


He was barefoot, his feet grubby and dusted.
The face seemed younger than the muscle on a body that looked honed as if he’d been working on sharpening it. But the eyes could pass for as old as these stones and held something that looked about as ruined. With his face half in shadows he almost could be one of the angels who should have been on stained glass here, and maybe he’d stepped out from the shattering.
Or could be he was one of the ones who’d fallen because of great sin.
He stepped closer and went down to one knee, genuflecting, she thought for the absurd fragment of a second, but his head didn’t bow. And now his eyes were at the same level as her.
He put his hand out, palm up. “It’s okay. You’ll feel disoriented and confused for a time. That’s normal.”
“Normal?” The question sputtered out. “What does this place have to do with anything normal?”
God, it felt good to get a coherent sentence out. It surged some strength into her arms and legs, make her stop shaking like an EM needle over graphite-laden shears. She uncurled her fists and her body, pushed up against the pillar and back to her feet. He rose as well, his eyes tracking her as she stood, his hand falling back to his side again. He was only a few inches taller than she was. Most guys weren’t.
“Just where am I? Who are you? How’d I get here? Where’s the rest of my staff?” Ah, good–coherent questions. Or they would be if her teeth weren’t chattering. She could hear the lack of control in herself, and she dragged down another breath that left her entire body aching. Putting back her shoulders, she thought of how the Old Man would have been yelling at her at this point to ‘buck up.’ Thank god he wasn’t here to see her, but on the other hand she could have used him–and a few more military types.
She’d have to make do with what she had.
Now if she could remember what had happened goddammit.
“What happened to me?” she asked. “What happened to my team?”
The guy turned away, angled his body from her last question as if he wanted to walk from it but couldn’t. She stared at the profile of a straight nose and strong chin, at angles made sharp by what looked like existence living. And she knew with insight so sharp it jolted whose blood covered her hands, splattered her clothes.
“Oh God,” she said, dragging the words from hiding. Eyes stinging, she gulped a breath through her mouth–no, no, no! She repeated the word in her head, but she knew the truth. Knew it bone deep.
Oh, God! Not Thompson. He had a baby due in three weeks. And Chand–had he been spared because he was out sneaking a cigarette? She couldn’t remember, but Chand didn’t think anyone knew about his habit, even though he took breaks every two hours and came back with tobacco acrid on his clothes. And what about Zeigler, or the new tech whose name she couldn’t remember? Eyes stinging, she swallowed hard, gulped down another aching breath.
Well, she’d just mapped something new–grief and terror could fracture in you like a vibrant sunset with the edges of darkness falling fast.
Some part of her catalogued the adrenal burst pouring through her–elevated pulse and quickened breath to oxygenate the blood, trembling to loosen muscles. She thought about the Tai-Bo she’d taken up last year to try and fight off the pounds that came from working too hard and not eating right. The fad was already past, but she’d always been off any normal trend–and it fit well with the self-defense her father had taught her as if he’d intended her for a military career.
Straightening, she made her next question very clear, dropping each word like a stone into water six times. “What did you do to them?”