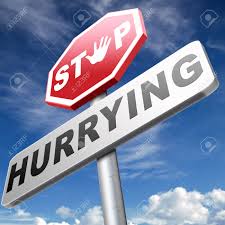 I’ve seen a new habit cropping up with a lot of beginning writers–they’re all rushing the story. It’s like these writers are so afraid of a slow pace that the story takes off the other direction, meaning too fast for the reader to start to care about the action and way too fast to establish the scene and the characters.

Visual media–movies and TV–have it lucky. A thirty second shot can do a lot to establish place, time and even give you a good bit of information on a character. But in any written media, all of that needs far more than a sentence or two on the page.

Now I’m not saying you have to drag the story out, or load on the details until it is overwhelming. I’m talking a balance between too much and too little. Too much information can indeed slow a story down and leave the reader turning pages to jump ahead to where there is some action and the story starts. But too little information can leave a reader confused, and leaves the setting unclear and will not help the reader into the story with vivid details.

The opening of a story–or every scene in the story–is also a vital place to set the reader into the world, the moment, and is a place to establish the tone of the story. Yes, an action packed story should start off with action. But a historical romance can slow down the pace. A cozy mystery doesn’t have to have the same grit as a police procedural. Writers need to think about the type of story being produced. And have confidence in their own skills. A writer who will take time to set up the story and the scene will better hook me because I can see at once that this writer will deliver on the promise in those opening pages. I trust this writer knows how to TELL A STORY.

And I think that is where a lot of young writers fall down. Yes, you need to know the technical stuff–how to write a sentence or craft a paragraph so it won’t trip the reader. Even more important is how to tell a story, and that means all parts of the story. This means you want to know how to craft every scene so it has an arc–a beginning, middle and end. You want to know how to weave in conflict and tension, but how to do so with also weaving in vital details.

A writer needs to use all the senses to bring the reader into the world–to make the reader smell the air, feel the chill or warmth, hear the crunch of frost or gravel. It’s about more than throwing in just a few crumbs of details–the writing must have enough brush strokes to realize the world. And that means the writer has to see, hear, smell and think about all these details.

It’s not enough to say the hallway was black and white marble with a grand staircase. I want to know if that marble is polished to a sheen and is slick to walk on, or is it dusty and cracked. I want to know if the air is stale or fresh with the scent of orange blossoms and roses from a hot house. I want to know if the character standing next to that grand staircase is shivering in the cold of a draft, or sweating from oppressive heat and wishing a window could be opened. I want to see the world through the character’s eyes and have a mood established of foreboding, or joy, or tension, or awe. I want to hear the footsteps crack against that marble, or hear the slam of a distant door and I want to be immersed in that world. All that means the writer must be just as immersed.

It is noted that the great writer Chekhov once wrote to his brother Alexander, that, “In descriptions of Nature one must seize on small details, grouping them so that when the reader closes his eyes he gets a picture. For instance, you’ll have a moonlit night if you write that on the mill dam a piece of glass from a broken bottle glittered like a bright little star, and that the black shadow of a dog or a wolf rolled past like a ball.”’

This has come to be attributed as: Don’t tell me the moon is shining; show me the glint of light on broken glass.

Which Checkov indeed did in one of his stories:  The dam, flooded with moonlight, showed not a bit of shade; on it, in the middle, the neck of a broken bottle glittered like a star. The two wheels of the mill, half-hidden in the shadow of an ample willow, looked angry, despondent …

So maybe it is a need for these younger writers (and by young, I mean in experience, and not so much in age), to slow down and read their own work aloud. That’s a habit I learned early on. Reading your work aloud is a great way to catch not just the mistakes, but to hear the cadence of the words and to learn where more is needed. It’s rather like having a chef who must takes the food–a lack of tasting leads to not enough of the right spices.

Or maybe it’s just a need to slow down in general. Stop trying to rush to the end. Start letting the reader–and yourself–enjoy more of the process of getting there. Let the story unfold and spend more time with the details. Do multiple drafts and look to improve every single draft with more of the right details and more vivid images and senses. Give the reader a world the reader won’t want to leave.

And think about the overall tone of the story–go for more of what you want to give the reader (more humor, or more romance, or more tension, or more whatever you want to deliver). A writer’s job is to deliver a great story–and that means the writer must first imagine it.

6 thoughts on “Rushing the Story”