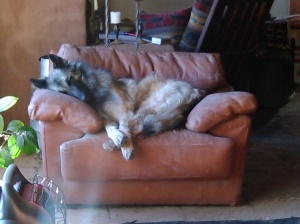 I’m starting my Show and Tell workshop Monday and it always kicks off with everyone focused on showing more and better. Great stories do need great scenes with lots of showing, which has the characters on the page and expressing emotion. However, there’s a place for the narrative in any fiction–a writer needs both these tools.

(Oh, and, yes, Cas–our dog–will be  napping during the workshop in his favorite chair.)

Now, I like to say that what most writers really need to look at is how to tell better in the right places and show more of the character expressing emotion. It’s usually emotion that gets left off the page (and out of the scene). How do you do this?

There are some technical tricks that can help. (Cas doesn’t care about these, but he does like a good bone to chew on.)

1 – Tell when you need to get some quick information on the page—or to shorten what you need to convey to the writer. Telling is a great way to compress time, handle a transition to a new scene, or simply put some info that on the page that you need for the reader. Nothing is worse than exposition put into a character’s mouth. That makes your dialogue stiff and often makes the character sound stupid for stating what is probably obvious.

2- Show more by eliminating ‘telling’ dialogue tags. She exclaimed, he smirked, she pouted, he expounded, she tossed back, he leered, she sighed…all of these are telling the reader an emotion. You want to show how your characters express emotion on the page—that’s where you need to show more.

3 – Use telling to alert the reader that the character is relatively unimportant. This is where a lot of writers get it wrong by telling too much about the main character, which makes that person seem unimportant. This sentence makes it clear that the cab driver is not a main character: The cab driver dropped her off at the train station. If you spend three paragraphs describing what that cab driver looks like, how he drives, and how he acts, you are showing that character is important. Keep things clear for reader—what you give pages to matters most.

4 – Show you character in action right away to get a reader’s interest and sympathy. This is key to creating likeable characters, or at least character that a reader is willing to settle down with for a few hours. If your main character is supposed to be smart, show that person doing something smart. If your main character is an ace magic user, show that character using that magic in an amazing way. A lot of writers feel like they have to show the character in a tough situation—that’s fine. But really look at what you have shown—is the situation all that tough or is the character just being stupid? You may get the reader’s scorn instead of sympathy.

5 – If you tell, you don’t need to show; if you show you don’t need to tell. This is about trusting your readers to ‘get it’. You do not need to hit the reader over the head. You don’t need to say: He was angry. And then show that character being angry. Repeating information can blunt the impact on the reader—your writing starts to feel dull and the scene sags. Sometimes repetition can be used for a certain impact, but use this technique carefully and with intent.

6 – Do remember to get the emotion onto the page—either show it or tell it but put it on the page. It’s easy when you’ve got a lot of action to get lost in getting that sorted out and forget that the reader really wants to know what the character is feeling. This is something I see a lot of in contest manuscripts. The writing is good, there’s plenty of action, but I have no emotional involvement because I have no idea if the character is frightened, amped up on adrenaline, angry, or covering up feelings. Know your characters, and get their emotions on the page!

7 – Cut the clichés in both your showing and your telling. Readers want a familiar read, but not a duplicate of something read a hundred times before—cliché actions and reactions flatten your story. Cut or change every cliché. This means no stalking into the room like a panther. No gazing into a mirror and doing an inventory of hair, eyes, and the standard description. No women (or men) who had their hearts broken once and so that person has vowed never to love again. Put a fresh spin on every cliché—whether it is narrative or a reaction to a situation. To do this, you need to know every character and your character must react in character—this means no making character take actions to make a plot work.

Work on your telling so it’s tight, brilliant writing—no one’s going to tell you to cut writing that is wonderful, even if it’s all telling. And then in scenes get more emotion on the page by showing how your characters express emotion. It’s that simple—but simple is always hard work. (Harder than burying a bone, according to Cas.)

For more about this–and some great exercises, check out the workshop.

2 thoughts on “The Importance of Showing–and Telling”