We have a guest post by Charlene Raddon, author of Taming Jenna, Tender Touch, Forever Mine, To Have and to Hold, and writing as Rachel Summers, Scent of Roses. Charlene normally blogs at  http://www.charleneraddon.blogspot.com, however she’s here now with great info on the history of handbags.

NOTE: Charlene is giving away a free book and $5 Amazon gift card to a random commenter. You must comment by March 1, and leave an email address so you can be contacted.

Purses, pouches, or bags have been used since humans first found a need to carry precious items with them. Egyptian hieroglyphs show men wearing purses around the waist, and the Bible specifically identifies Judas Iscariot as a purse carrier.

During the 14th and 15th centuries, bags were attached to the most vital feature of medieval garb: the girdle, along with rosaries, Book of Hours, pomanders (scented oranges), chatelaines (a clasp or chain to suspend keys, etc.), even daggers. Women favored ornate drawstring purses known as “hamondeys” or “tasques”. Men used purses known as “chaneries” for gaming or for holding food for falcons.

During the Elizabethan era, women’s skirts expanded to enormous proportions and small medieval girdle purses became lost among huge amounts of fabric. Rather than wear girdle pouches outside on a belt, women chose to wear them under their skirts. Men wore leather pockets (called “bagges”) inside their breeches. Large satchel-like leather or cloth bags were sometimes worn by peasants or travelers, diagonally across the body.

In the 16th and 17th centuries the more visible bags were rejected and long embroidered drawstring purses were hidden under skirts and breeches instead, while some people wanted them to be conspicuous, for use as decorative containers for gifts, money, perfume, or jewels. Toward the end of the 17th century, purses became increasingly sophisticated, changing from simple drawstring designs to more complex shapes and materials.

Following the French Revolution, narrow, high-waisted dresses became popular, leaving no room beneath for pockets. Consequently, purses, in the form of “reticules” or “indispensables” as the English called them, came into use, showing that women had become dependent upon handbags. The French parodied the women who carried the delicate bags that resembled previously hidden pockets as “ridicules”.

Victorian era developments in science and industry provided a vast array of styles and fabrics women could coordinate with their outfits. Though pockets returned in the 1840s, women continued to carry purses and spend an enormous amount of time embroidering them to show off for potential husbands, often including the date and their own initials in the designs. Chatelaines attached to the waist belt with a decorated clasp remained popular.

The railroad brought about a revolution in the use of bags. As more people traveled by train professional luggage makers turned the skills of horse travel into those for train travel, and soon the term “handbag” emerged to describe these new hand-held luggage bags. Many of the top names of today’s handbags started as luggage makers (whereas, previously made purses and pouches were made by dressmakers). Hermes bags were founded in 1837, a harness and saddle maker. Loius Vuitton was a luggage packer for the Parisian rich. Modern handbag designs still

allude to luggage with pockets, fastenings, frames, locks, and keys.

After WWI, the long constricting layers and rigid corseting women wore disappeared. Perhaps the most important development during this period was the “pochette,” a type of handle-less clutch, often decorated with dazzling

geometric and jazz motifs, worn tucked under arms to give an air of nonchalant youth. Rules for color coordination grew lax and novelty bags, such as doll bags (dressed exactly like the wearer), became popular. The discovery of King Tutankhamun’s tomb in 1923 inspired purses reflecting exotic motifs. 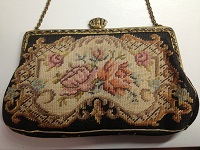 Today, purse designs continue to fluctuate, and always will. What sort of purses do you remember using when you were young? In the 1950s I had a pink and white, square plastic purse I loved. I wonder whatever became of it. If I owned that purse now, it would probably be worth a pretty penny.

Charlene Raddon’s Latest book is To Have and To Hold…

A woman without a prayer…

A widow with two children, Tempest Whitney had to mortgage everything to repay the money her husband had stolen. But even as she struggles to hold onto her Utah homestead, a scheming rancher buys up her debts, demanding she either get off his land or marry him. Then a dark-haired stranger shows up, claiming to be her dead husband…

A man without a past….

Buck Maddux spent two years in jail for a crime he didn’t commit. Now a death bed promise has brought him to Tempest’s dugout. A man without roots, he doesn’t plan to stay—or to feel so fiercely protective of this feisty beauty he saves from a forced marriage. Suddenly, Buck yearns for a home, a family, a lasting love. But what can he offer Tempest? The surprising answer lies in the forbidden canyons of an ancient Anasazi tribe, where fortune and danger await—along with a passion more precious than gold…

Riding up to the house, he called out a hello and dismounted. Surrounded by barking dogs he proceeded to water his horse at a well built over a natural spring. From beneath the wide brim of his Stetson he searched for some sign of life. Finally he headed to the house, spurs jangling in his wake. His fist was raised, ready to knock, when the rough plank door swung inward and the business end of a Henry repeating rifle met with his nose.

“Judas!”  He jerked back and stumbled over his own big feet. A cat screeched, letting him know he had mangled its tail. The critter got even by climbing Buck’s leg. Yelping and dancing while he tried to extract the cat, he trampled two or three more felines. Easy to do; half a dozen littered the yard, along with pigs and a flutter of chickens.

“What do you mean?” she asked.

The cat took off, kinked tail in the air. Buck checked for damage and decided he’d live. “That’s a mite awkward to explain.”  He took off his hat, wiped his brow on his sleeve and replaced the hat back, buying time while he studied her.

She wasn’t much to look at. The braid hanging to her waist appeared as though crows had been pecking at it. Dun-colored strands fluttering about her head gave her a wild look that belied the delicacy of her face. A strong chin balanced her large eyes and a mouth as stubborn as the mules in the pole corral. A patched apron hung to her scuffed boots and hugged her legs snugly enough hint she wasn’t wearing skirts. He was wondering what might be under the apron when she spat, “Spill it, mister. I haven’t got all day.”

“Think you could put down the gun?” He eyed the rifle with amusement and chagrin. “This might take a while and your arms are like to get tired.”

“Don’t think for a second, just because I’m a woman, that I can’t shoot this rifle,” she drawled. “I hate when men jump to such conclusions. Makes me so angry I start shaking and that makes my trigger finger jittery, if you know what I mean.”

Buck knew. A jittery trigger finger meant he might get shot for no reason. He eyed her speculatively. She wasn’t much bigger than a colt; no problem for a man his size to handle. “I doubt you’d enjoy where they’d put you for shooting a man,” he said, smiling to hide his growing irritation.

“Nobody goes to jail for self-defense. Especially a woman. You going to state your business or not?”

“Are you Tempest Whitney?”

He sighed. “Name’s Buck Maddux. I ran onto your husband two years ago. He was gut shot and bleeding bad —”

“Maddux!” Her head snapped up and her finger tightened on the trigger. “You yellow-bellied son of a coyote. How dare you come here? Didn’t you cause enough grief robbing that stage and getting my husband killed? Get off my property before I fill you with lead the way the posse did Skeet.”

He threw up his hands as she stepped closer. “Easy, ma’am, I didn’t come here to get you all upset.”

“What did you expect? That I’d welcome you with open arms and invite you in for supper? Just because my husband let you rope him into a stupid robbery doesn’t mean I have to put up with you.”

That did it. Now he was angry. “Hold on a minute here.” His mouth was tight, his voice hard. “I had nothing to do with that robbery, or the Army patrol who shot your husband.”

“Sure. You were just an innocent bystander who happened to be with Skeet when he was caught.”

“Raspberry stickers!” she spat. “You plotted that hold-up. You killed my husband as surely as if you’d pulled the trigger yourself.”

Buck’s blood boiled. He told himself it was because she’d accused him of lying, not because she’d come too close to the truth, but the excuse didn’t wash, adding to his fury. In one swift movement, he away snatched her rifle, threw it to the ground, and shoved her against the door jamb. He held her there with his body, her hands pinned above her head, while he stared into amber-sparked brown eyes.

To Have and to Hold

10 thoughts on “The Beginning of Handbags”